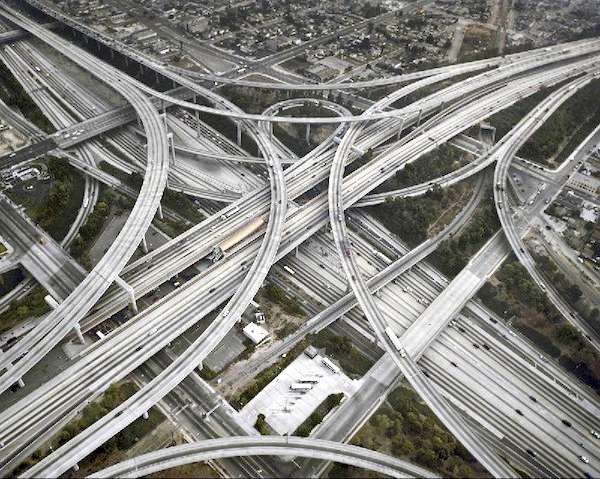 Thousands of Houstonians are in danger of losing their homes as the state of Texas proceeds with a massive, $7 billion plan to widen almost every highway in North and downtown Houston.

Mass displacement, worsening air quality, wider segregation and more flooding are some of the outcomes experts are warning will result from the 25-mile widening known as the North Houston Highway Improvement Plan, which would enlarge Interstate 45 and adjacent highways, including I-69, over a 25-mile stretch.

Activists want to delay a vote on funding for the highway expansion that is scheduled for tomorrow, saying that more public comment is needed on the controversial project.

And no wonder. The expansion would engulf thousands of homes — 365 of them low-income housing — requiring their demolition and the displacement of their occupants. But mass displacement is just one of many harms that would be born most heavily by lower-income people living near the expanding highways.

With some portions of I-45 and adjacent highways widened by as much as 70 percent, the project has enormous, long-term implications for neighborhoods across northern and downtown Houston.

Here are some of the injustices the expansion would visit upon Houston:

The expansion would imperil some of the more desirable swathes of affordable housing in Houston — a sprawling metropolis with little public transit or investment in affordable-housing construction.

The project will affect two public housing projects — Clayton Homes and Kelly Village in the Fifth Ward — destroying 368 units of low-income housing, 60 of which house formerly homeless veterans. In all, Texas proposes leveling 168 single-family homes and 1,067 multi-family units, including apartments, townhouses, and condominiums.

Clayton Homes is an almost 300-unit public-housing complex, a series of modest but attractive townhouse-style dwellings built in 1952 and renovated in 2007. It sits right against I-69 — an 18-lane, concrete labyrinth of soaring flyovers and access roads that slices through the Fifth Ward. Successive waves of construction have brought I-69 ever closer to residents: parts of the complex are now within a few dozen feet of the elevated highway. Clayton Homes also got hammered with flooding in 2017, during Hurricane Harvey.

Now, the highway will obliterate these modest but affordable dwellings.
All sorts of vulnerable populations live in the way of the highway.

Among the thousands of Houstonians who would be displaced is Kathryn Kundrod, a graduate student who lives with two roommates in a condo right off the I-45/59 interchange.

“I’m in a much more privileged position position than most of the people that will be displaced,” she told Streetsblog. Kathryn found out by letter two years ago that her building was slated for demolition in order to expand the highway. The condo is the only place she could find that would allow her to bike commute to her school, Rice University.

“It’s just been such a frustrating and sad situation given that the end goals probably won’t be accomplished by all the money and effort and displacement,” she said, referring to induced demand (when highways are widened, people respond by driving more, and they become congested again).

She said she is hopeful because groups like the Make I-45 Better coalition are stepping up to oppose the Texas Department of Transportation’s plan. 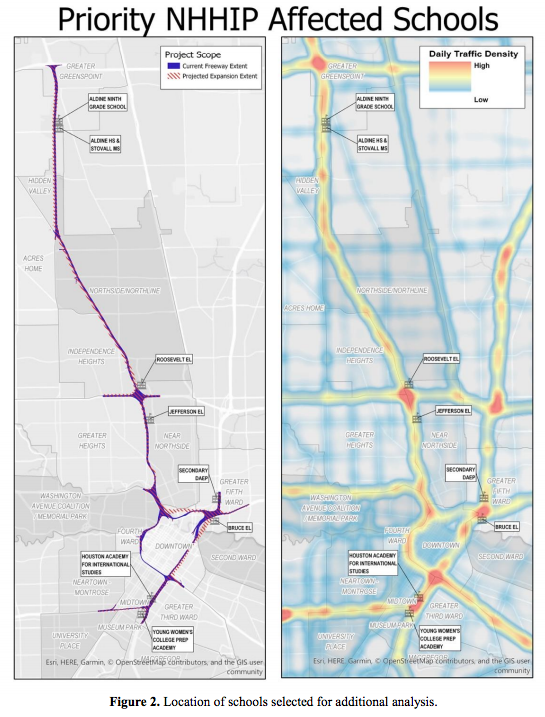 This map shows the schools and air-pollution hot zones near Houston’s highways that would be worsened by the mega-highway widening plan. Map: Air Alliance Houston

A recent study by the Air Alliance Houston found the highway mega-project will have disproportionate and serious health effects on low-income and minority neighborhoods, from worsening air quality to a greater risk of flooding — benefiting “exurban commuter traffic” by “burden[ing] communities within the city and those that live, work, learn, and play in close proximity to the corridor.”

The plan would bring 26 schools and daycare centers within 500 feet of a highway — many of which already have elevated asthma rates. Bruce Elementary for example, which is near Interstate 10, has an asthma rate of 7.2 percent.

Air Alliance Houston is asking the Texas Department of Transportation to mitigate air quality by planting trees along the highways; ensuring students have safe, complete streets and crossings, and paying for high-quality air filters for the schools.

The highway widening will reinforce racial disparities in Houston — including bad air quality and inadequate social cohesion  — suffered by many neighborhoods. Some of the negative consequences, of course, resulted from the construction of the highways in the first place — but  the widening of the highways, by as much as 70 percent in some places, will only compound the inequities, Air Alliance Houston says.

“SH-288 separates high-income, majority white neighborhoods on the west side of SH-288 from low-income, majority people of color neighborhoods on the east side,” the group writes. “I-45N separates residents of Independence Heights (a food desert) on the west side of the highway from the closest grocery store, which is on the east side.”

Consequently, the executive director of Air Alliance Houston, Dr. Bakeyah Nelson, is calling of the Texas Department of Transportation to reconsider the expansion, in order to “discontinue the legacy of treating communities of color and low-income neighborhoods as collateral damage.”

“Displacing residents and destroying historical cultural landmarks for the sake of widening a highway, which will eventually meet the same fate of gridlock as the Katy Freeway, reflects outdated thinking and bears a tragic resemblance to inequitable transportation decisions from the past,” Nelson said in a statement.

The expansion plan does include some positive measures, such as the demolition of the Pierce Elevated viaduct, which separates Midtown from Downtown. Such mitigation plans, however, are concentrated in whiter, more affluent neighborhoods.

Meanwhile, low-income communities of color are getting the fewest such amenities, such as green spaces or decks over the roadways, Air Alliance Houstonwrites. Some neighborhoods affected by the project have poverty rates as high as 75 percent.

The project will increase flooding in areas that were devastated by Hurricane Harvey. It also will magnify heat-island effects — the raising of temperatures in certain areas owing to human activities — in nearby neighborhoods, both pressing environmental issues for  Houston.

“We have expressed to TxDOT and local elected officials serious reservations about the air quality, flooding, and other impacts of this mega-project,” Michael Skelly, leader of Make I-45 Better Coalition, said in a statement.